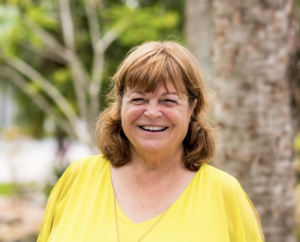 When Lesley was a baby, it was clear something was wrong – she didn’t eat or respond like a typical newborn. Doctors in England, where she was born, determined she was in an adrenal crisis. At the time, little was known about how to manage Congenital Adrenal Hyperplasia, or CAH. To keep her alive, Lesley needed medications multiple times per day, and she had to live at the hospital for two years.

Following her hospital stay, Lesley was moved into a children’s home in England where she was raised until she was 18 years old. Growing up, she was plagued with multiple illnesses and infections.  Because of CAH, a fever or a sore throat could be life-threatening for Lesley and hospitalization for adrenal crises became common. At six-years-old, an adrenal crisis put her in a life-threatening coma. Lesley’s condition meant she needed two urogenital surgeries at the ages of 4 and 16.

Once Lesley was old enough to live on her own she embraced her freedom. She says she felt less concern about managing her condition and at the time did not fully appreciate the severity of CAH. She did not always take the multiple medications that were necessary for her to live. When she was 22, Lesley had meningitis and went into an adrenal crisis, which she believes was the wakeup call she needed.

Lesley married at 27, and due to a lack of fertility care, had no biological children. She does have a stepdaughter, whom she was honored to help raise. Lesley works as a registered nurse and has helped many patients throughout her career in obstetrics and gynecology.

Nonetheless, the threat of adrenal crises remains a constant throughout her life. Lesley most recently had an adrenal crisis in 2015 that put her in the hospital for an extended stay.

Lesley is a leader and an advocate for the CAH community. She proudly dedicates her time to helping others with CAH, serving on the board and on multiple committees of the CARES Foundation, a non-profit solely dedicated to providing information and support to people and families living with CAH.